Improving the titer of live infectious bronchitis vaccine for hatcheries 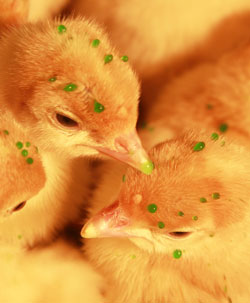 Live IB vaccines were originally developed and delivered by nose drop to poultry because, logically, the respiratory tract was the tissue we were trying to protect by a mucosal response. However, eventually the economic pressure from high labour costs in developed poultry markets forced researchers to seek more cost effective ways to deliver live virus vaccine and protect poultry.

During the 1950s the IB vaccine strains were confirmed as being viscero-active, meaning they are able to provide immunity and protect the respiratory tract from disease challenges even if they are swallowed, not inhaled. From that point IB vaccines have been mass applied via both hatchery aerosol spray and drinking water.

Dosing by spray at day-of-hatch is still favoured over dosing by drinking water after placement because, among other things, earlier application provides earlier onset of immunity.

Beyond the time and labour savings, reducing the number of times a hatchery sprays chicks is desirable because each successive pass through a vaccine mist wets the birds and induces thermal shock.

Three different vaccines are commonly sprayed in the hatchery; they are vaccines against coccidiosis, Newcastle disease, and IB.

When possible, hatcheries prefer to combine multiple vaccines in a single spray to reduce the number of passes and the amount of water that soaks the birds.

Another way to avoid soaking the chicks is to apply the vaccine in a firm gel spray. Gel spray droplets rest on top of the feathers instead of soaking to the skin. Chicks naturally preen the large gel drops and thereby pick up the vaccine in concentrated form, where it can directly generate immunity.

Gel-Pac is a premiere edible gel delivery vehicle. Added as a dry powder to hatchery tap water, it suspends active ingredients like probiotics, vaccines and nutrients uniformly for even distribution on the chicks. It is also stabilised with vaccine preservatives that extend the life of viral or bacterial live vaccines, making them more uniformly effective at protecting the entire flock with higher titers.

To measure Gel-Pac’s titer extension, researchers at Lasher Associates compared the potency of a live IB vaccine delivered via aerosol spray in distilled water to the same vaccine delivered in edible Gel-Pac prepared with chlorinated water as a hatchery would from tap water. A live lyophilised IB vaccine was introduced into:

Titrations of the virus were conducted in specific-pathogen-free (SPF) embryos at 0 minutes for the water-alone treatment to establish the initial titer, and again after 120 minutes for all three treatments.

In the presence of chlorine, Gel-Pac fully preserved the vaccine virus against inactivation, sustaining the initial vaccine titers and preventing the decay observed in the negative control.

A live commercially available IB vaccine, MILDVAC ARK2, was reconstituted in 10ml of water and then diluted to a concentration of approximately one label dose per ml in each of the following three vaccine sprays:

The vaccine in water was titered immediately and after 120 minutes to quantify the amount of virus as positive controls. The vaccine in the other two preparations was titered at the end of a 120 minute residence in solution. The 4ppm concentration of chlorine was selected to represent typical concentrations found in hatchery tap water, and the 120 minute duration was deemed to exceed the normal life required for a hatchery gel vaccine spray.

Titrations were conducted in triplicate using specific-pathogen-free (SPF) embryonated eggs. The method was the one required for vaccine manufacturers, described in Title 9, Code of Federal Regulations 113.329. The method of Reed and Muench was used to calculate the EID50 per dose. 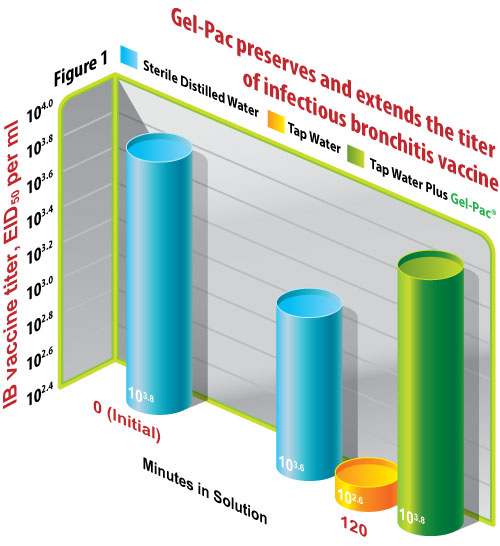 The geometric mean titers of the IB vaccine in water alone at initial time zero and at 120 min were 103.8 and 103.6 EID50/ml, respectively. In chlorinated water (no stabiliser) the final 120 minute titer reduced to 102.6 EID50/ml. In contrast, the titer of the virus exposed to water containing 4ppm chlorine and extended with Gel-Pac remained 103.8 EID50/ml at 120 minutes.

The final titer of the Gel-Pac stabilised chlorine solution contained over 15 times more live vaccine virus than the non-stabilised solution, equal to the initial titer (Fig. 1).

IB vaccine protects poultry against bronchitis infection when either inhaled as an aerosol or when ingested via oral-gastric exposure. Consequently, poultry producers frequently administer IB vaccine via the oral route to birds after leaving the hatchery. Gel-Pac is a powdered vaccine stabiliser designed to create a protective suspending gel when mixed with hatchery tap water.

The edible gel facilitates oral vaccination while hatchling poultry are still in the hatchery by allowing them to consume the gel droplets rather than inhale atomised spray. One potential advantage includes the ability to combine the vaccine with other oral actives in a single gel spray.

Successful application requires the gel itself to be inherently safe for the vaccine and for the gel to preserve the vaccine in the presence of potential oxidisers in the tap water used to prepare the gel or in other additives the vaccine may be mixed with.

This research sought to determine if Gel-Pac protects the vaccine from toxic oxidisers which may exist in the hatchery tap water or well water.

As expected, after 120 minutes the vaccine was significantly degraded in chlorinated water, dropping to 102.6 EID50/ml (94% loss from the input control).

The product protected the vaccine against this oxidation, preserving the initial concentration 103.8 EID50/ml at 120 minutes (15-fold higher vaccine titer than the same solution without Gel-Pac).

Gel-Pac proved both safe to the vaccine and effective at preserving the vaccine against potency declines in water that otherwise would be lethal to it. It has been used commercially to stabilise and accelerate the administration of oral additives such as fragile probiotics in an edible gel given at day of hatch.

This research confirms similar previous findings with Newcastle disease vaccine in which the product also protected vaccine from inactivation by lethal oxidisers in the hatchery water supply. IB vaccines are fragile, consequently, they have not been recommended in combination with other sprayed additives that may pose a risk of inactivating the vaccine and rendering it useless. In addition to Gel-Pac delivering the vaccine alone, its preserving protection may allow IB vaccine to be combined with other oral additives, streamlined into a single gel spray.

Edible gel is intuitively more appropriate as a vehicle for many additives. Testing Gel-Pac’s potential to permit vaccines to be administered with a wider array of edible additives remains a further focus of study.

References are available on request from Ryan Izard E-MAIL.

SpecSheet | Spec Sheet Spanish | SDS | SDS Chinese | SDS Spanish Gel-Pac® new generation stabilizer aids in the administration of gel-delivered vaccines and probiotics for poultry. It is especially designed to prolong the viability and improve the effectiveness of reconstituted and diluted vaccines and probiotics in a gel that is convenient to prepare and easy for birds to consume.