Avoiding sub-clinical coccidiosis in poultry is an important element of efficient production.  Sub-clinical coccidiosis robs profit from each flock, and the extent of the damage can amplify from flock to flock through oocyst cycling, eroding each successive flock’s performance like waves during a rising tide.  Coccidiosis control was achieved initially with antimicrobial drugs (Levine, 1939), and later with vaccines (Edgar, 1956).  Antimicrobial drugs are coming under more regulatory scrutiny, and ionophore anticoccidials are also avoided as a means of improving consumer perception by some poultry integrators.  These shifts are driving the industry to seek optimum protection from vaccines.  Efficiently improving vaccine protection has been the aim of a number of different vaccination techniques, and the key objectives have been to obtain early onset of immunity and more uniform vaccine exposure among the birds in a flock.

In employing different strategies to obtain faster onset of protection and better uniformity, producers vaccinate variously by dosing drinking water after placement, misting aerosol on birds at hatch, spraying edible gel droplets on hatchlings, spraying vaccine on feed at placement, eye dropping, and, more recently, injecting in ovo.  A study comparing a number of these vaccination methods, followed by a coccidiosis disease challenge, concluded that coccidiosis vaccine is more effective in terms of live performance and lesion scores when it is administered orally (feed or water) than when given by aerosol mist or eye drop (Firouzi, et al., 2014).  One complication in the Firouzi et al. report is that their in-feed vaccine was consumed on day 3, not day 1.  Recognizing that coccidiosis vaccines perform best when they are directly consumed, and that vaccines applied in the hatchery give immunity a head start while being easier to manage, stimulates interest in improving early oral vaccine consumption.  It adds weight to the notion that an ideal solution is an early hatchery application that also permits direct consumption of more concentrated vaccine.  Dewaele and Degussem (2016), designed a study to compare vaccine applied to day-old hatchlings in a stabilized edible gel (Gel-Pac®, Animal Science Products, Inc.) versus vaccine sprayed on feed for day-old chicks.

The objective of the study was to evaluate HuveGuard-Start® application via an edible gel spray, compared to spray vaccination via the feed on the first day of life.  Researchers assessed the oocyst excretion (cycling) pattern in feces in broilers under battery conditions after vaccination on day 1, and investigated the immune protection of both vaccine applications against a challenge with Eimeria spp. isolated from broiler chickens in the field. The efficacy of these treatments was assessed by surveying daily weight gain (DWG), feed conversion ratio (FCR), intestinal lesion scoring (ILS) and oocyst shedding, compared to an infected non-vaccinated control (INC) group and an uninfected non-vaccinated control (UNC) group.

Fifteen animals per group were allocated to four different groups depending on the vaccination they received, with three replicates per treatment group. Cardboard was placed over the grid of the birds’ cages from d1 to d20 to allow re-infection with the vaccine strain.

On d9, d14 and d19, five individual droppings per cage were collected for semi-quantitative analysis of vaccine oocyst presence, surveyed on a scale of 0-3.

On d20, animals were allocated to four different treatment groups depending on the vaccination that they received on d1. The four experimental groups formed one block each, which was replicated seven times. The birds were divided among 7 cages per group containing 5 birds each. Subsequently, in both the INC and all the vaccinated groups, the 5 birds in each cage were inoculated orally with a challenge mixture of Eimeria species isolated from the field. On d27, seven days after the challenge, all animals in each cage were euthanized and necropsied for coccidiosis lesion scoring. Scoring was performed following Johnson and Reid (1970), for the species relevant to broilers described in this scoring system (E. acervulina, E. maxima and E. tenella).

Chicks vaccinated on the first day of age began excreting detectable oocysts on day 7.  The number of oocysts excreted in the first cycling wave from d7-11 were greater for those vaccinated via gel than via feed (Figure 1).  That pattern of amplified early vaccine cycling persisted through d20, with the vaccine OPG from gel exceeding that of feed on all days except d20.

In addition to generating more early vaccine cycling, the vaccine sprayed in gel was more uniformly present among the birds than the vaccine sprayed on feed, indicated by a greater proportion of gel-spray fecal samples being positive for vaccine oocysts surveyed on d9, d14, and d19 (Figure 2).  For gel-immunized birds, d9, d14, and d19 percent positives were 53%, 67% and 93%, respectively, compared to 7%, 7%, and 60% for feed spray.  Beyond gel providing a greater proportion of positive fecal samples, each positive sample was also more densely populated than those from chicks vaccinated by sprayed feed (Figure 3).

The harmful effect of the challenge on non-protected birds was marked.  During the 7d post-challenge the chick DWG and FCR for UNC were 65.7g and 1.863 respectively, whereas the INC group worsened (P<0.05) under the pressure of the challenge to 32.1g DWG and 3.199 FCR.  Post-challenge growth and conversion during the 7d period did not differ between the two vaccine treatments (Table 1).

Intestinal lesions assessed 7d following challenge appropriately reflected the severity of the infection, with INC birds having significantly more total lesions, scored at 3.71, than UNC scored at 1.29 (P<0.05).  Feed spray scored 3.37, which was not significantly lower than unvaccinated birds.  Gel spray, in contrast, did protect birds significantly better, with lesions scoring 2.86 (P<0.05) (Table 2).  The improved lesion scores arising from the vaccine delivered in Gel-Pac was linked to fewer numbers of infectious challenge organisms.  Mean OPG 7d after challenge was markedly lower in both vaccinated groups than those that were not immunized, and the lowest OPG existed in the gel-vaccinates.  Total infectious coccidia in non-vaccinates numbered 313,421 OPG, those vaccinated in feed had 73% fewer at 85,991, and gel-vaccinate lesions reduced 88% to 38,189 (Table 3). 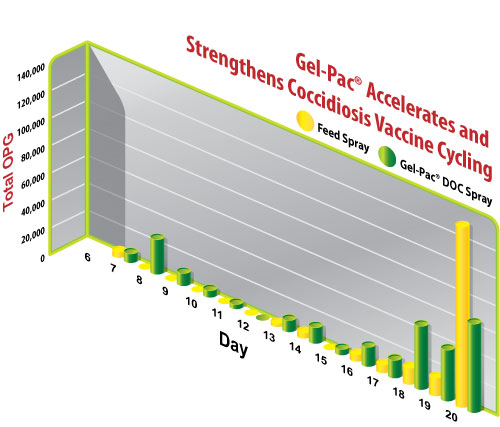 Intuitively, and borne out by the Firouzi et al. results, coccidiosis vaccination techniques that facilitate the most direct consumption of vaccine are also the most protective, and earlier immunity is preferred.  There were significant differences among the two direct oral vaccination techniques compared in this study.  Vaccine administered in Gel-Pac yielded greater early vaccine oocyst cycling that persisted through d19, and the stronger vaccine numbers were more uniform among the gel-vaccinated chicks.  The improved vaccination did result in better protection against the challenge by field organisms.  More complete protection was evident in gel-vaccinates, which had by far the fewest number of residual infectious challenge organisms, resulting in the lowest lesion scores.

Beyond the benefit of more protective coccidiosis immunity, Gel-Pac also provides options for better hatchery efficiency.  Gel-Pac, a powdered concentrate that hatcheries mix with tap water or well water, also stabilizes live virus vaccines such as infectious bronchitis and Newcastle disease, bacterial vaccines and probiotic bacteria.  It is engineered to safely carry these other oral additives in one single edible gel suspension that does not require constant agitation and does not soak hatchlings.  Gel-Pac is the ideal solution for more efficient, early hatchery spray. 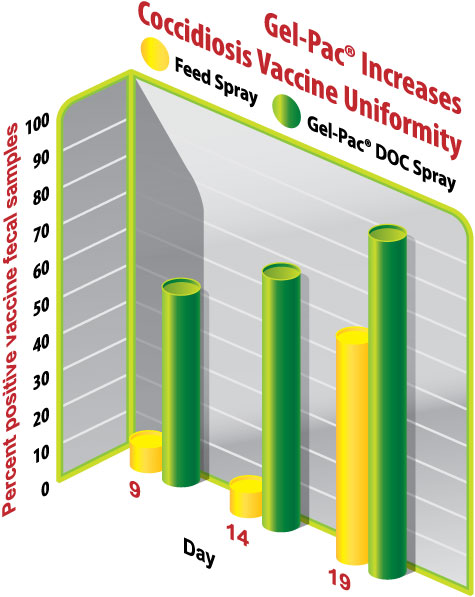 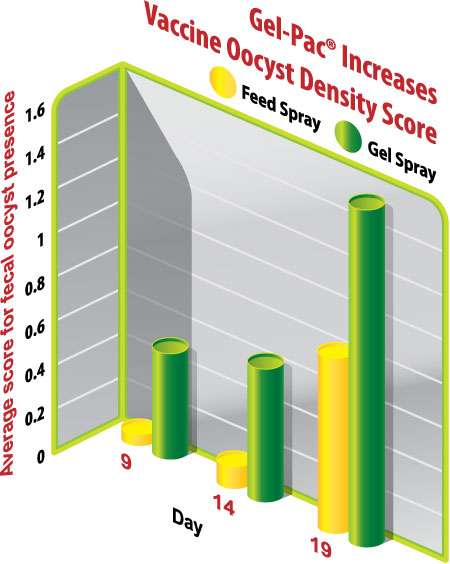 Edgar, S. A., 1956. Coccidiosis of chickens and turkey and control by immunization. In: Proceedings of the World Poultry

SpecSheet | Spec Sheet Spanish | SDS | SDS Chinese | SDS Spanish Gel-Pac® new generation stabilizer aids in the administration of gel-delivered vaccines and probiotics for poultry. It is especially designed to prolong the viability and improve the effectiveness of reconstituted and diluted vaccines and probiotics in a gel that is convenient to prepare and easy for birds to consume.