Picture moving sidewalks…you see them in airports throughout the world…there are two ways to use them. You notice some people who like to stand and enjoy the free ride, being carried leisurely along. Others stroll or even run on the moving sidewalk, accelerating their progress while being whisked productively on their way. If you are the second type, a walker, you may be frustrated by the other slow-movers plugging the path. Now think of the respiratory tract; like a moving sidewalk, cilia normally whisk mucus easily along. You hardly notice mucus unless, like other slow movers, it plugs your path. When infection or irritation hit, mucus becomes thick and elastic, choking the airway.

People have historically used expectorants to help make mucus thinner, less sticky, and easier to expel. Colonial explorers found natives in the tropical Americas using Guaiac tree extracts in the 16th century. Certain species of these trees still serve as the national tree of The Bahamas and the national flower of Jamaica. More recently gum of the Guaiac, which is approved in Europe and the U.S. as a food additive, was refined and eventually synthesized as guaifenesin, present as an active ingredient in the expectorant MucuSol®.

Extending The Model To Animals

More recently, Lechtenberg et al. (2016) have taken the technology out of the petri dish and into the pig, using their Swine Influenza Virus (SIV) challenge model to measure some of MucuSol’s effects during a severe respiratory challenge. The work was carried out at Central States Research Centre, Inc., Oakland, NE.

Twenty-five healthy, 3- 4-week-old crossbred pigs of either sex were confirmed SIV negative before arriving to the study site.  The pigs were without therapeutic antimicrobial by any route 14 days prior to challenge and had no history of SIV or P. multocida vaccination.  Pigs acclimated for 12 days before being challenged.  Study animals were randomized to placebo and treatment groups and housed in one BSL-2 (5600 series) room. Pigs were provided water ad libitum throughout the study period, and were fed a grower ration that did not contain therapeutic antimicrobials.

The clinical signs of infection using this model appear 1-3 days after SIV challenge. To mimic the field application of MucuSol expectorant, presented as a guaifenesin-containing syrup, the treatment group received 7.4 mL per gallon of drinking water beginning on day 2, at the appearance of symptoms.  The placebo group received water alone, and both treatments continued until all pigs were euthanized on day 8. A general health observation was conducted twice daily on all study animals. Any abnormality prompted the animal caretaker to notify the staff veterinarian. Intervention was provided by a veterinarian in consideration of the objectives of the protocol and in compliance with SOPs on animal care and use. Clinical scoring and rectal temperature collection started daily pre-challenge on day 0 and continued daily until euthanasia on day 8. Average respiratory score, nasal secretion score, depression score, and rectal temperatures were calculated for each treatment group for days 0-8.

Pigs were scored on the following scale:

0 = Normal – alert, active, normal appetite, well-hydrated, coat normal
1 = Mild – moves slower than normal, slightly rough coat, may appear lethargic but upon stimulation appears normal
2 = Moderate – inactive, may be recumbent but is able to stand, gaunt, may be dehydrated
3 = Severe – down or reluctant to get up, gauntness evident, dehydrated

Any animal that died during the study was subjected to a necropsy and required samples were collected. Upon day 8 necropsy, individual lung lobes were evaluated and the amount of consolidation was recorded. Lung lesions were differentiated by apparent etiology. 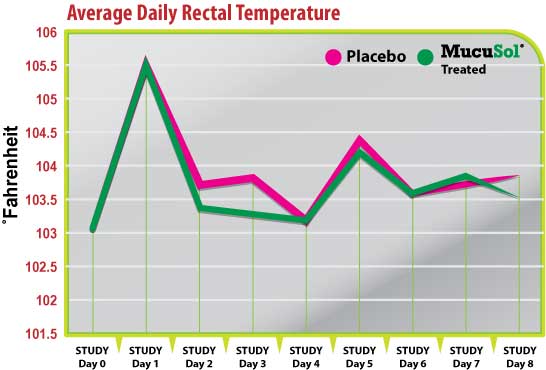 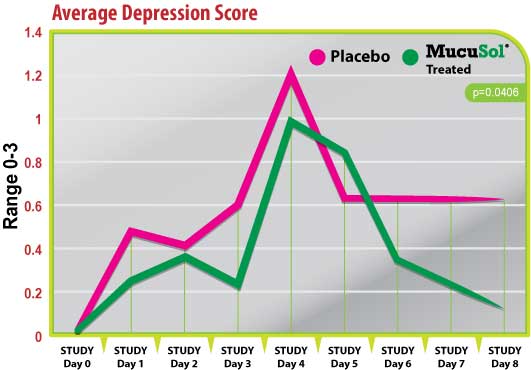 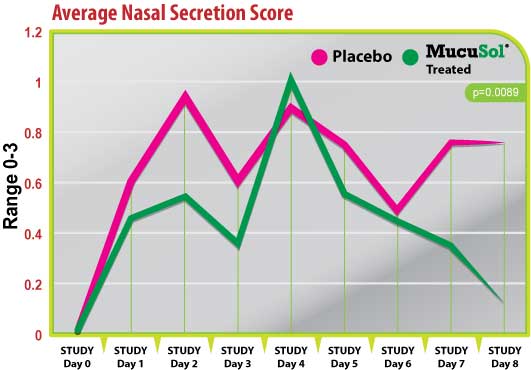 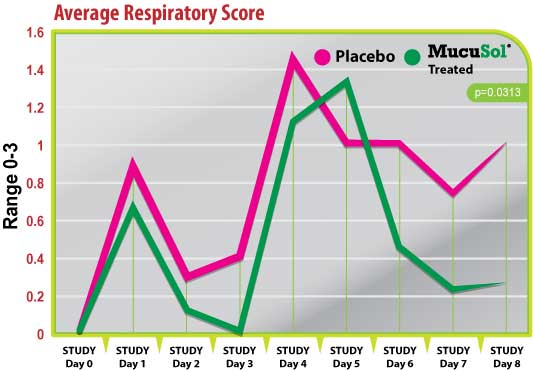 Both treatment groups started with average respiratory scores of 0 on day 0 (Fig. 4). Both groups responded with a peak in respiratory scores after the SIV challenge (day 1), and after the P. multocida challenge (day 4) with the placebo group having a higher average score than the MucuSol treated group on both days (day 1 placebo: 0.90 vs MucuSol: 0.67; day 4 placebo: 1.44 vs MucuSol: 1.11).

This study demonstrated interesting trends and some significant effects of MucuSol at diminishing specific clinical parameters associated with a SRD complex of viral and bacterial pathogens, and may serve as the basis for more statistically robust studies. Previous experiments in human cell cultures established that guaifenesin reduced mucus production, viscosity, and elasticity in a dose-dependent manner. The water-miscible MucuSol syrup used in this study facilitated the delivery of the normally-insoluble active ingredient by drinking water. MucuSol’s label recommendation and the dose chosen for the present study were established to proportionately approximate the OTC human dosage, and the results suggest it is in the range to obtain measurable respiratory responses in pigs. 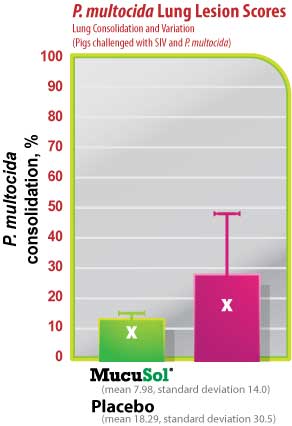 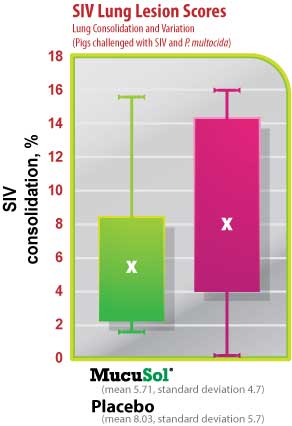 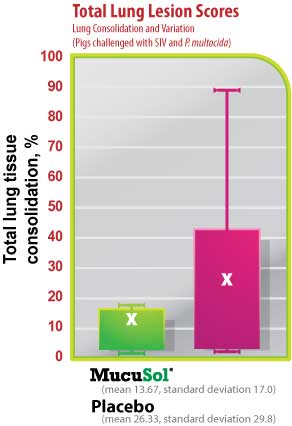 SpecSheet English | SDS | SpecSheet Spanish | SpecSheet Chinese | MucuSol Botanical SDS Mucusol is a liquid product developed for use in the drinking water of your poultry and swine populations as an aid in reducing respiratory congestion from mucus (phlegm).